I went to Florida for MSFCon18, and when I wasn’t frantically running around praying my wifi held for the livestreams (it did!) I relaxed by taking a few photos. Florida might have been steamy hot (eek! I know you get used to it, but eww!) but it had some super-pretty flowers and such. Plus I’m a complete fan of old restored hotels, so the Vinoy was exactly my kind of vacation spot.

This piece has been entered in the Patients Have Power Writing Contest run by Clara Health designed to raise awareness about clinical trials. I am passionate about this cause and hope it will help raise much needed awareness about the power of breakthrough research.

The cause of my (primary) rare disease is unknown. There are a few candidate genes, and research is moving forward, but at this time they essentially have no idea why I was born with Moebius syndrome, a very rare disorder causing facial paresis, skeletal abnormalities and neuromuscular impairment.

My go-to description is “It’s probably genetic, but not inherited” – they have no idea what causes it.

That’s not very specific, is it?
That lack of specificity, of knowing, is one of the hardest parts of living with a medical condition for which there is no known cause. It’s funny, actually, knowing the cause wouldn’t do anything groundbreaking due to the nature of my condition… but I want to know. I like knowing stuff.

Knowing what has “caused” my condition would, in a way, help me to better know myself.

So the question is: how do researchers research these rare, complicated disorders where there’s no clear genetic link?
I’ve been giving blood samples for over 20 years, clearly that wasn’t enough.

Enter the National Institutes of Health and Natural History Studies.

Moebius syndrome is lucky, in that the director of the NIH, Dr. Francis Collins, took a specific interest in us and championed our cause. He was part of a group that proposed the first natural history study of the condition.
It sounds ridiculous at first, to voluntarily put yourself through a week of testing, a few MRIs, yet more testing, getting zapped by electrodes, and more NIH waiting rooms than you can imagine. But it was actually pretty darn amazing.
In the winter of 2016, I spent a week in February roaming the halls of the National Institutes of Health Clinical Center, one of the most amazing buildings in the world. I met with so many specialists, all who were knowledgeable about Moebius syndrome (a rarity!) and were invested in the discovery process. I did have a lot of tests, some of which were annoying and painful or just loud (I mean, who voluntarily has 2 MRIs?)…BUT I was made to feel as if this was a really cool endeavor I was taking part in.

I was made to feel as if I was part of the discovery process. It reaffirmed for me that Patients Have Power.

When you have a very rare disorder, getting over 20 doctors in a week who all know about it and don’t act as if they are totally outside of their element is worth it. In addition to feeling like I was positively contributing to research, I got valuable information about myself.

Now, what happened next?

In the movies, a Natural History Study would magically lead to finding THE CAUSE and everyone would rejoice. Unfortunately, real life is not that easy. The researchers saw many people with Moebius syndrome, some people with similar conditions (and a few who they were able to diagnose with conditions while at NIH), and made no groundbreaking discoveries. Yet.

What is powerful about clinical trials and natural history studies is that the data itself is as valuable as the personal experience and treatment that comes from it. The data, samples and cell lines created at the National Institutes of Health are now in labs throughout the country, where researchers are still unpacking the causes of Moebius syndrome.

They have faith that discoveries will be made, thanks in large part to Natural History Studies.

I love riding because it’s so applicable to… other stuff. 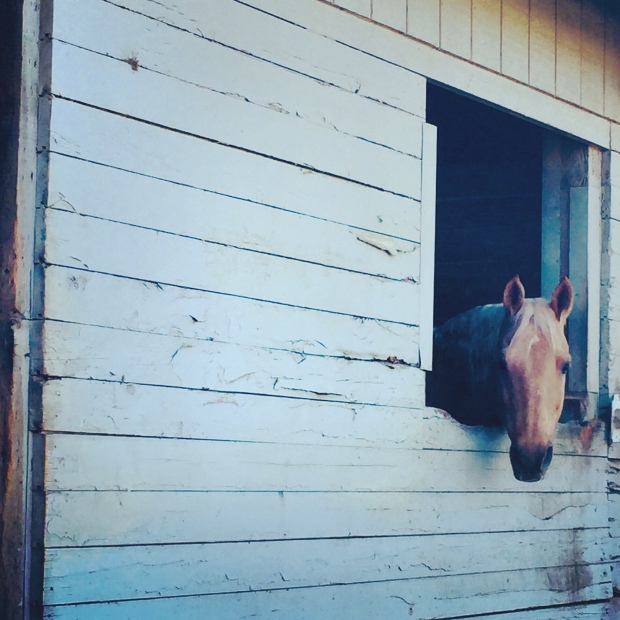 There’s a concept in biomechanics that you need to sit forward on your horse – you can’t get left behind.

And that’s true with life, too. FORWARD is imperative. Moving forward isn’t necessarily away or towards, but it’s having a trajectory and working towards something. It’s when life throws you curveballs holding, adjusting, reframing – but not going backwards.

Sometimes I’m better than others at remembering this. But I try. And I love it as a mantra.

Pushing forward, into the wind. 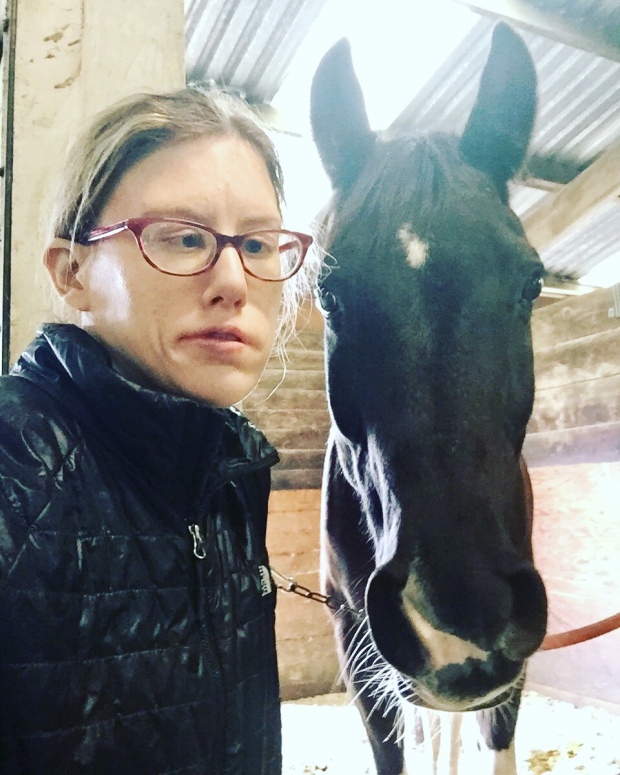 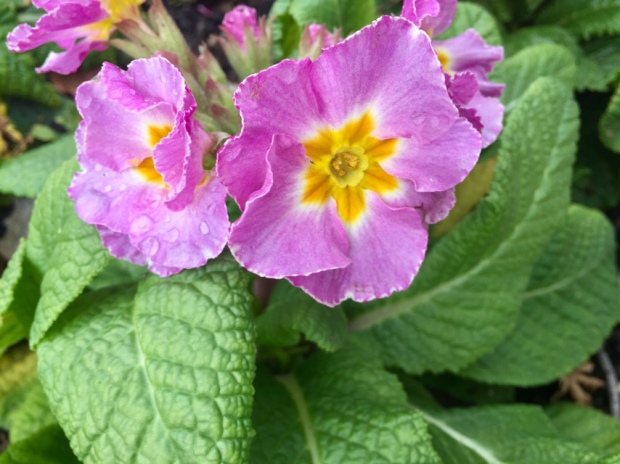 I’m aware that I’m just not into the whole awareness thing right now.

I’m aware that there are immediate things that I just care about more now.

I’m aware that I drastically cut down my online presence and it’s done wonders for me.

I’m aware that this is perhaps avoidance but I just don’t care.

I’m aware that I am smarter about things, about trusting people, about what I share.

I’m aware that I’ve found a goal to work towards that motivates me in new and exciting ways (more about that soon).

I’m aware that people really don’t know me, don’t really understand me, are probably judging me.

I’m aware that they do not define me.

I’m aware that I control more than I think.

I’m aware that I am both defined and not defined by what has happened to me.

I’m aware of it all, soaking it in, living with it.

So things in equine-world are pretty fun right now. Piggles the Morgan has fancy glue-on shoes, and is pretty darn happy with them! I’m going to Los Angeles this weekend to get classified by the United States Paraequestrian Association/FEI to see where I classify and if this is a realistic goal. And having a lesson with their riding consultant, who also happens to be the one who has led the amazing British paradressage team for years.

I have no delusions of dressage greatness, the Paralympics or anything like that. I just want to have fun with the horses and have goals to work towards.

So in the name of working towards goals… my trainer has a new mantra for me:

Yes, it’s grammatically incorrect. But the idea is this; I have a bunch of ways to do that in my riding toolbox. I can decide what to do. I can try something, see if it works, try again. I can use my experience and intellect and feel to make it good-er in a way that feels right at that moment.

There are many ways to make things good-er, and I’m cautiously approaching my non-equine life with that mindset.

But that’s a blog for another day.

So September is yet another Month, this time Craniofacial Acceptance Month. Yay?

As their tag line for this year. Headdesk moment. At least for me.

Isn’t acceptance looking at, not beyond?

Isn’t acceptance seeing the whole person, not ignoring something that’s a major part of them?

The politically correct thing, I guess, is to pretend that differences don’t matter, or aren’t consequential. But that is a complete fallacy. They matter.

A true acceptance or awareness campaign needs to acknowledge that they matter, not necessarily in a negative way. Mattering can be positive, too.

So that’s my hope, that sometime we can look at, not beyond, facial differences…

(Bracelet pic is a song lyric, I see you. I thought it was appropriate.) 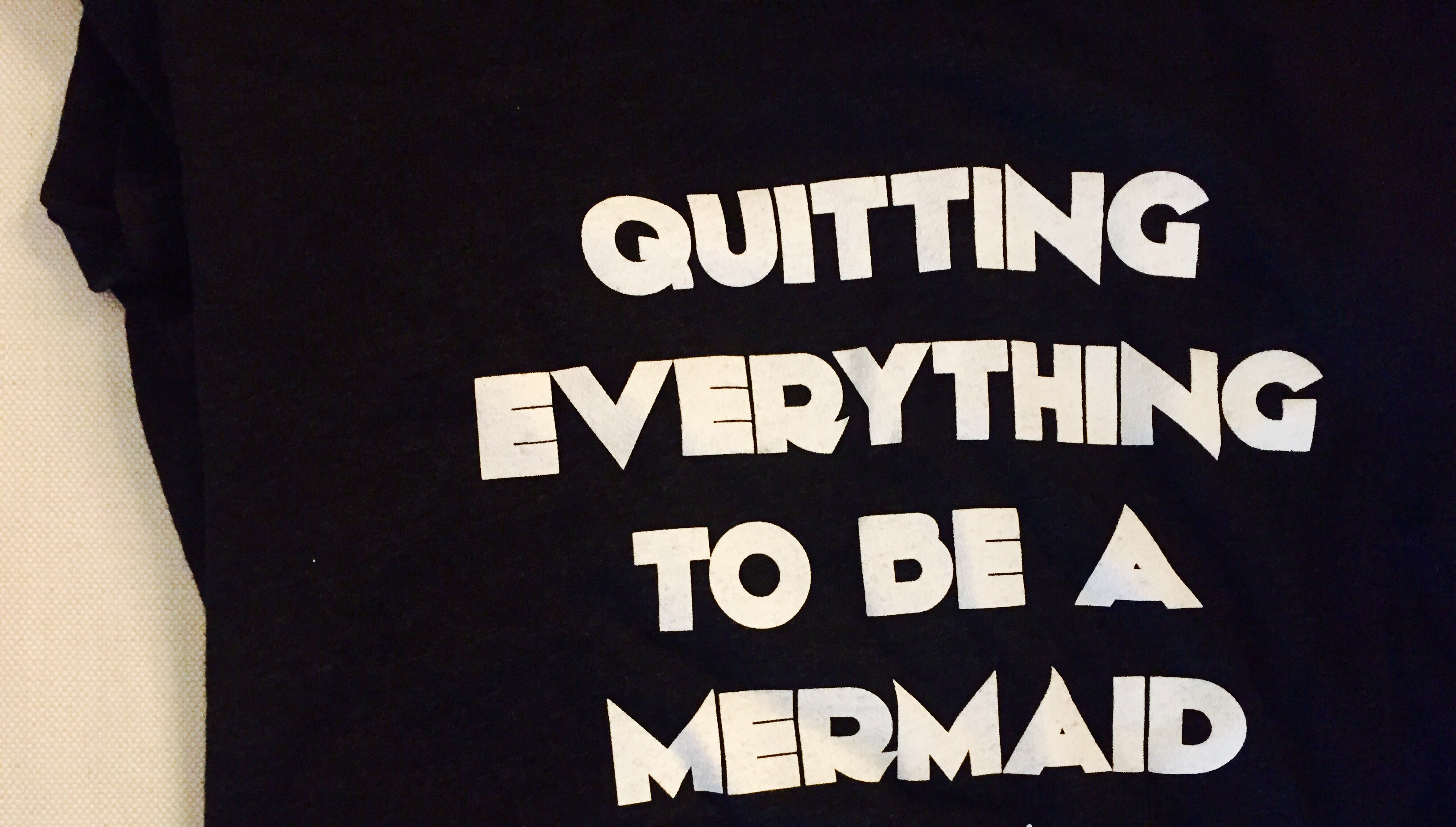 Sometimes in life, you need to strap on your figurative big girl pants… or in this case, a mermaid tail, and go for it.

Lots of stuff happening now, some awesome, some meh, and some that just sucks. Holy vagueness I know. But it’s all happening (cue Lin-Manuel Miranda’s In The Heights)… and it’s a bit too much.

So when the opportunity provided itself to attempt a water aerobics class while wearing a mermaid tail, I couldn’t not do it! 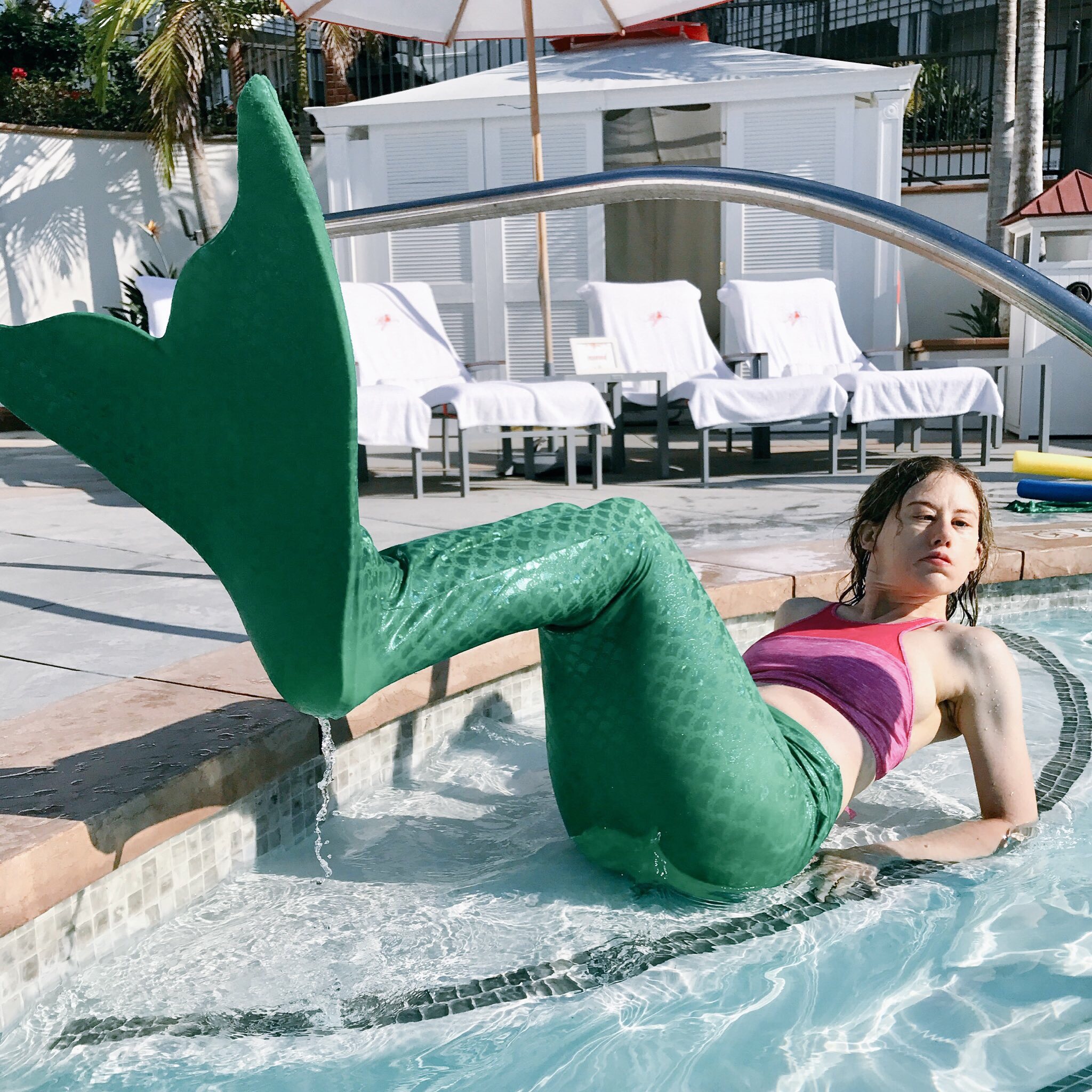 So some takeaways from my mermaid-ing: tails are buoyant. Sometimes too much so. But they give you a heck of a lot more power when you harness it in the right direction. Water aerobics is hard regardless, and harder when your legs are strapped together.

I can’t wait to do it next time.

So I’m off to channel my inner mermaid, even when land-bound… 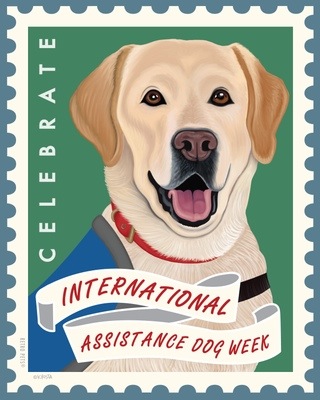 I don't have the brain-power for an extensive post… but sending love to all of those in the assistance dog community – partners, trainers, puppy-raisers, supporters, volunteers.

But most importantly, sending love to my couch-warmer, picker-upper of dropped things, and wannabe-mailman. 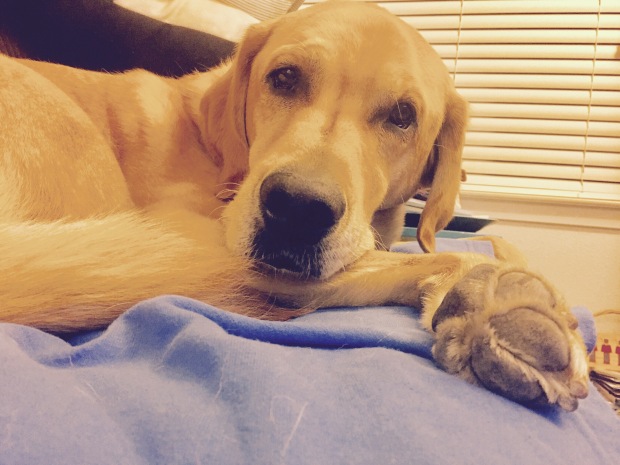 I can feel you breathe, just breathe. Forgive the randomness. I did have a short-lived country music period.

I’ve always just kind of failed at the breathing thing. I’ve literally failed with all my respiratory stuff. And I’ve figuratively failed at just about every yoga class I’ve tried. The whole concentrating on your breath… I just never got it. My mind wanders, I can’t connect my breath to the movements… I just didn’t do it right.

So I was skeptical when my trainer told me breathing was something that would help me get to the next level in my riding. It was one of those things that sounds great in theory, but it practice… not quite.

A few months ago, we started working on it in my rides… expanding my breath over a few strides, breathing in rhythm with the horse’s feet… generally, just being aware of it. Then we moved to actually doing something with that breath, with moving the horse forward in a rhythm.

I am not the most rhythmical of people or riders… but somehow, this made sense. I get how to use my breath in this way… and it works! Now that I’m actually using some sort of rhythm, the horse goes “oh, I can do that!”

Since we had that breakthrough, I’ve gotten some really good walk and trot work, collected and really moving through his hind end. Because I’m actually breathing correctly, I’m giving my horse better direction.

Poor guy is probably thinking, “finally!” And so am I. Now the trick is to translate that Zen from riding to other parts of life… easier said than done. 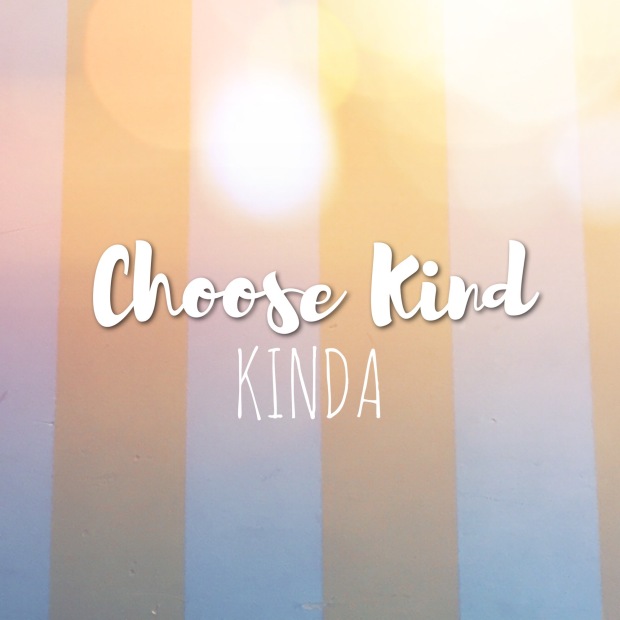 So the trailer for the Wonder movie came out. What to say?

I’m hoping the media blitz associated with this movie is inclusive of the craniofacial community at least, but I’m worried about tokenism and overly-saccharine emo pieces.

The tag line of the book and movie is #ChooseKind. Is taking actual disabled people out of the story kind to them, and to us as a community? Will it actually promote kindness, or will it further the othering of that-which-cannot-be-shown-onscreen? We shall see.